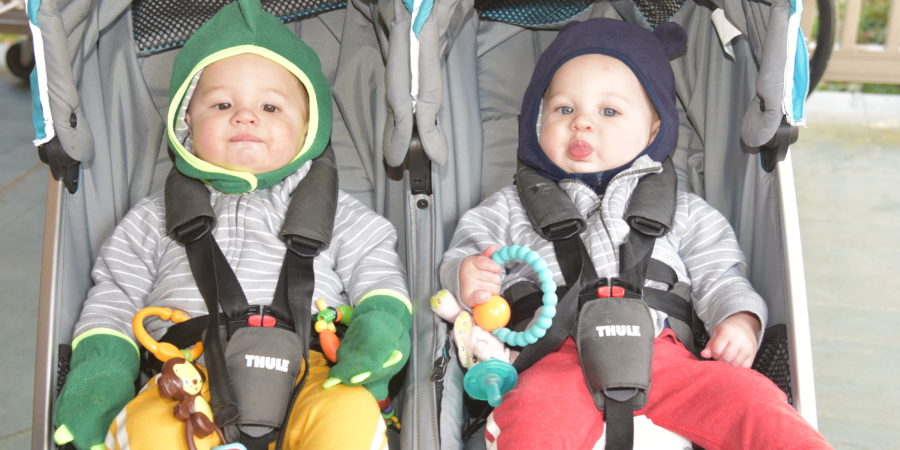 Up until this month, I have posted monthly updates exactly on the 21st, but this month I realized on Sunday afternoon that it was the 21st and was in shock that the month passed so quickly!  So forgive my tardiness on this one.  Samuel and Henry are 8 months old – how the heck did that happen!?  This month has been huge as far as milestones go, and I feel like every time I turn around, they are doing something new.

Eating
Last month we decided to wean the boys and move to formula.  I strongly believe that FED IS BEST, and I had said from the beginning that I would breastfeed until it didn’t work for our family.  They are still doing great on the formula and since they are on the go, I feel like they are always eating!

I’m working on incorporating more solids into their diets, but some days I don’t get to it because it’s a lot of work and usually a big mess.  Last month they tried green beans, sweet potato, applesauce, avocado and banana.  This month they’ve had a lot of mixes so they’ve tried most fruits, beets, kale, spinach, peas, cottage cheese, pureed turkey and chicken, as well as some solids like apple cider donuts and other carbs. 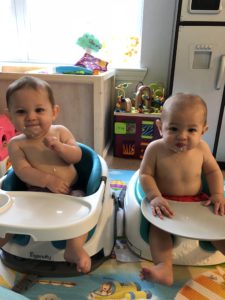 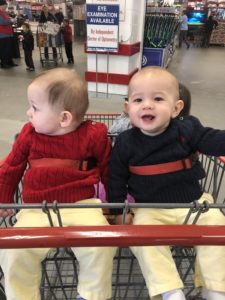 Sleeping
Last month we also sleep trained the boys with help from our favorite sleep consultant Annie (you can find her here, she’s fabulous) and I’m so glad we did.  The boys have been doing great.  They sleep 6pm -6:30am most nights, take a 1.5 hour nap in the morning, and then take another 45-60 minute nap in the afternoon.  I’m thrilled with how well they are sleeping.  The best part is that their afternoon nap lines up with Elizabeth’s nap so I get a solid 45 minutes to myself every afternoon! 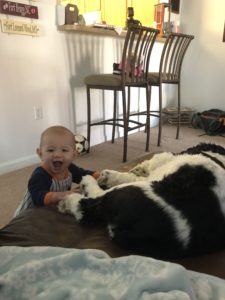 Likes: anybody talking to him, his big sister, chewing on anything he can get his hands on, bath time, riding in the grocery cart, peekaboo
Dislikes: being away from people (he will crawl as fast as he can to get to where the action is), being “alone” for too long, getting stuck while exploring

Personality: Sam is very vocal with his likes and dislikes and will let you know if he is happy or unhappy.  His highs are super high and his lows are super low.  He takes after his mama in that he has ALL the emotions!  He has the sweetest smile that he gives liberally to anyone that is near him.  Sam also sucks his thumb and I think it’s the cutest thing ever (although I might not be so fond of it when he needs braces).

Milestones: Sam is officially crawling on all fours and is doing it quite fast.  He pulls up onto anything he can get his hands on – people, furniture, the exersaucer, toys, etc.  We had to drop his crib mattress a few weeks ago and their cribs look like such big boy beds now.  Sam is also starting to do a little bit of cruising (holding onto the couch but taking steps), and I think he will be walking much sooner than Elizabeth did at 14 months. His hand – eye coordination is getting better each day, and he is able to feed himself finger food which is quite adorable. 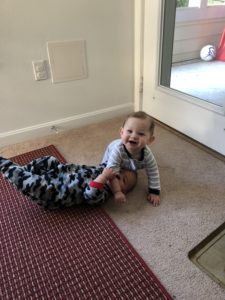 Likes: grabbing at toys -especially anything that belongs to his sister (much to Elizabeth’s dismay), pulling hair (mine, Elizabeth’s, his brother’s), bath time, his doggy
Dislikes: there’s not much that he dislikes.  Last month I posted a list of thing that makes Henry cranky, but none of those are relevant anymore.  He really is a carefree baby – unless he gets himself stuck somewhere.

Personality: Henry is still my chill boy (he gets that from his dad).  He is content pretty much wherever we set him down and puts up with his sister and brother bumping into him, crawling on him, etc.  I am so thankful for his relaxed spirit, because Sam and Elizabeth are a little more high maintenance and it’s nice to have one child who is content and happy no matter the circumstances.  However, Henry is starting to fight back – climbing on both Sam and Elizabeth when they’re on the ground.  They definitely deserve it, and it’s cute to see Henry feeling so triumphant.

Milestones: Henry is still about 7-10 days behind Sam in almost every physical feat.  He is crawling on all fours, pulling up onto furniture and people, and sitting up with a lot of confidence.  Although he’s just a step behind Sam when it comes to moving, he exceeds him in his hand/eye coordination and his thoughtfulness.  You can just see his little mind working as he examines the toys in his hands, and he is so quick to reach out and grab a toy or a handful of hair (or a pair of glasses).  Henry is also stringing together a lot of syllables.  He says “ga-ga”, “ba-ba”, and “da-da” (which Don is thrilled about) and rambles on and on with those when he’s in a good mood.

Henry’s two bottom teeth popped through at the beginning of October (almost exactly a month after Samuel’s), so now the boys are even in tooth count.

**This month all three kids are interacting so much more.  E loves to hug her brothers and barrel-roll them around the house.  It simultaneously terrifies me and thrills me and the boys laugh and laugh, so I can’t even get upset.  The boys are also playing with each other and all three are doing a pretty good job of sharing toys with each other.** 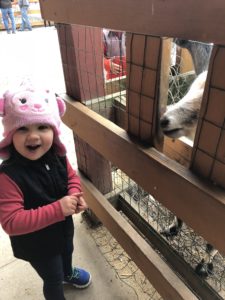 Elizabeth is the BEST big sister.  She is so concerned when a baby is crying, hugs them first thing in the morning, gets them toys when they are fussing, and attempts to move them if they get stuck.  She interacts with them a lot more.  We’re trying to teach her to be more gentle because she doesn’t quite grasp that they don’t have the skill that she does.

One thing I love is that she is now showing a ton of interest in her baby doll.  She wants to put on her diaper, bring her toys, feed her, and carry her wherever we go.  I love that she is turning into such a nurturing big sister. 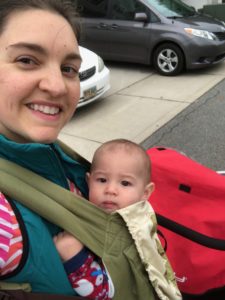 This month had many more highs than lows which I am thankful for.  Now that both boys are on the move – usually in opposite directions – life is definitely more hectic, but still manageable.  I’m getting into a better routine with getting out of the house/feedings/naps/etc and in general feeling more confident.

Don’s grad school classes are challenging, but he’s home more often than he was in Missouri and we are thankful to have him around more often.

This month didn’t include any major adventures, but a lot of day trips to National Parks, another round of apple/pumpkin picking with friends, multiple visits to the library and Learning Express, and a lot of walks on the paths near our house. 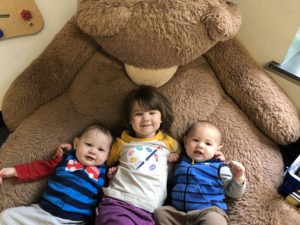 Hi all!  I’m Katie, a 30-something mom to a toddler + twins, army wife, and part-time blogger.  Thanks for joining me as I document life with our little circus, army moves, our quest to visit all of America’s National sites, and my journey to get fit! 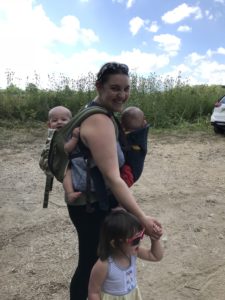